Dapper Monster at my door 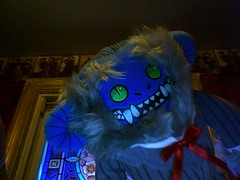 Monster at my door
Originally uploaded by jaborwhalky

So an odd little well-dressed monster showed up at my door today.
He tells me that Melita has sent him and inquires if he could have a cup of tea.
Well, any other monster would be told to come back another day, but since Melita sent him, we let him in.
He has since made the tea, done the dishes and is talking about making cookies. So we have offered him a place in our house as the butler and I think if you're looking for one of these little gentleman monsters as well you should go here: http://missmonster.bigcartel.com/
As our new butler tells us, a great many of his fellow monsters are all being put up by her after their monster butler school closed down. To add, he says they're in dire need of new families to serve and take care of.