As promised here are my 2009 Dragon*Con steampunk photos!

If you use or borrow please give photo credit!

More information can be found at

Hey everyone! First time posting here, but long time lurker. I had such a great time at DragonCon and met so many wonderful steampunk folk. You may have seen me most of Friday and Saturday as part of Outland Armour's Steampunk Star Wars group (I was Slave Leia), and on Sunday night I wore my Cavalier outfit to the Outland Armour panel and subsequent roving around the con.

The dress is really more "Neo Vic" than steampunk, but I had fun making it. The skirt, bustle and jacket were created by me. The hat was a gift from my lovely Shelly from Inhale Corsets, and the corset was a joint venture of ours. I plan to add more accessories and appropriate weapons and gadgetry in the future to "steam" it up.

I haven't had a chance to get many good photos of said outfit, and have been waiting til I did so I could post some pictures. Luckily,

sadistic_apollo and I ran into Eurobeatking and he was kind enough to do a quick photoshoot for us. Figured I'd share some of the pictures. ^_^

So, I am really interested in doing steampunk. Problem: I don't know where to begin! Where do you get the ideas for your creations? Dragoncon was filled with steampunk and I wanna join!!
Some guidance would be most appreciated !

It seems like most of the costumes I've seen have been in shades of brown. I'm just beginning to learn about Steampunk, and am working on my persona and putting together costuming ideas. Is there something wrong with incorporating more color into my steamy wardrobe?

Today Only! Use Code NUMBERNINE at checkout to save 19% Sitewide!


Hallo hallo, good day to you all

I very much love all you steamy kids, I think this is my favorite subculture movement out there so far. I'm enjoying the whole culture of it all and I am extremely interested in creating a costume of my own.

What are the variations on this style? And what would you call a mix of steampunk and modern and/or futuristic style?


This is a lame post, I know, but I'm always looking for a new way to look interesting, It's kind of a hobby...

think anyone could help me?

I attended Dragon*Con this weekend. Most of the photos I took were of steampunk events/individuals. They are here: http://www.flickr.com/photos/gothpanda/sets/72157622310907258/ Please feel free to use the photos for icons, if you appear in any of them, but please also link back or at least give me credit. They're not the best photos but they're mine. :)

Having now posted some photos, I'd like to bring up the topic of Neo-Victorian etiquette. On Friday evening there was a steampunk fashion show at Dragon*Con. After standing in line, many of us found that there were no available seats and were forced to sit on the floor.

Now I am ordinarily a feminist and would not ask anyone to give up their seat for me. However, when I am wearing a corset, heels and a skirt, because I am part of a genteel subculture that appreciates such accoutrements, I expect to be treated like a woman wearing a corset, heels and a skirt. I was shocked that half the seats in the room were taken up by so-called "gentlemen" and more than a dozen women in corsets and heels and skirts were seated on the floor. I kept waiting for someone--preferably a man--to ask the men to rise and let the women take their seats, as would have occurred a hundred years ago when these clothing articles were popular, but this never happened.

I am curious as to the opinions of the community on this. Because I have to say, if you want me to wear a corset, heels and a skirt again in the future, this sort of thing has got to change. I was very uncomfortable on the floor, had a hard time getting up (no one offered me a hand up, either), and was deeply disappointed by the lack of etiquette from a group of people with whom I generally associate excellent manners.

Feel free to disagree with me here, but if the concensus is that women shouldn't demand the etiquette of the Victorian period whilst we are clothed in the costuming, then I won't be attending any more events in such costuming without my own chair!

Guys seriously put your photos here:
http://www.flickr.com/groups/dragoncon_steampunk_2009/
(Some of us were running around far too much to even remember to take out our cameras, so you are our only hope)

If you were at at Dragon*con Hi! I hope if I met you I was not too overtired and underfed, and did in fact make sense.
If some of you are here after seeing all the goggles walking around the con and wanted to know what the heck all of it is about I highly suggest checking out the user info for the group here: http://community.livejournal.com/steamfashion/profile
Good run down of Steampunk Style suggestions here:
http://community.livejournal.com/steamfashion/929255.html

And if you wish to read steampunk fiction:
http://www.steampunktales.com/
http://www.ottens.co.uk/gatehouse/gazette/
http://www.myspace.com/steampunkmagazine
Also this empire is a great deal of fun:
http://steampunk.ning.com/

Well, of course "9" is just opening today, that's sly concept marketing for you. :) And, since I've got just enough cash in my bag, I'm going to go see it at the last evening show after I get off work. I'm working til 9 pm and there's a show at 9:30; means a late night for me, but there's always coffee in the morning...

To bring this more directly on topic here:

from an interview with the director:
MassieTwins: How did you come up with the visual designs, especially for the “stitchpunk” characters – and can you tell us about the origin of that name?

Shane Acker: I’m a big fan of steampunk. I love the Jules Verneian, turn of the century design aesthetic. It celebrates mechanics but at the same time there’s a kind of ornamentation. I think it’s really beautiful and expressive and visual. I wanted to bring that to the world. It’s as if the industrial revolution had progressed another 300 years and we hadn’t gone into the digital age. There’s sort of computer technology but it’s all mechanical. If the Victorian era were to collapse in some post-apocalyptic event, then these creatures are made from all the bits and pieces that are left over. That’s the idea behind “stitchpunk.” It’s not steampunk, which fell away, but the bits and pieces of steampunk that got stitched together. I wish I could say I came up with “stitchpunk” but I didn’t. It was someone on a blog, but it really hit the nail on the head. 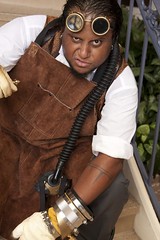 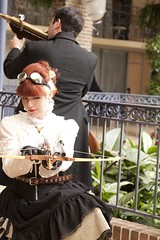 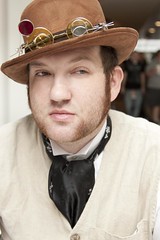 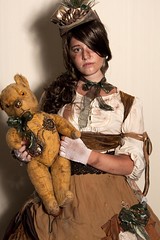 Steampunk costumes at dragoncon. More to follow through out the week.

As Halloween approaches I'm thinking more and more of the big question: Who/what am I going to be for Halloween this year?

Now, Halloween is my favorite holiday for many many reasons (asking strangers for candy, doomy gothiness, spooky things, dressing up, skeletons, staying out late, &tc..), and I put much effort into my costume every year. I haven't quite decided, but I came upon an amazing idea while contemplating.

STEAMPUNK WITCH! Or any other generic costume...

So, I went and made this steampunk witch hat:

And absolutely fell in love with the idea. What other boring generic costume idea can I make awesome?! I was reading Girl Genius and on this page: http://www.girlgeniusonline.com/comic.php?date=20090828  she is wearing an awesome steampunky lab coat that would look great as a doctor/scientist costume (though why those are Halloween costumes I will never understand).

That all being said, I would love to see some other ideas for a steamy Halloween. What other costume ideas do you think would work? Keeping this separate from cosplay of course. I'm thinking of those generic Halloween costumes. I want to steam them up so they aren't so boring anymore.

You can check out more pics of the *awesome* witch hat in my journal or at my etsy, here: teatimeinc.etsy.com.

I'm developing a character that is a widow and going through a (sorta brief) period of mourning and I'd like to know more about the clothing (Is it just normal clothing that's made of black fabric?) and jewelry set aside for grieving.

Many apologies for Monday, so to make up for it tonight, tomorrow, and Friday there will be photos from DragonCon, along with Friday’s post.

Admittedly, we didn’t spend very long there, and our digital camera apparently has the quality of a step up from disposable, but we had a blast. On the way home and the whole day after all we could really talk about was how much we miss the con scene. We’ll be at AWA on the 18-20, but mostly behind the table. Marlon and I figure we’ll take turns, so that one of us will be wandering about while the other mans the table.

I absolutely can’t wait for cons to be a regular thing, not just something that’s rare or when I can afford it. There are few times I feel more at home than among the masses of crowds in costume or black t-shirts and glasses. Last year we attended with our friend, but we ended up missing a lot of things I would’ve loved to see. We were there to be around each other, since we were long distance, so it wasn’t so bad. Now that I’m more focused on what I want to be doing, however, any moment the con floors are open that I’m missing seem like such a waste … so much so that even the few hours I spent hanging around the free sections of the con just weren’t enough.

Oh, the many, many I’d love to get into in artist alley rather than as an attendee! San Diego Comic Con, A-Kon, GenCon, and Wizard World Chicago are all ones I’ve attended that I’d love to switch roles at. Plus, there are so many, many ones I’ve never been to: SteamCon and Emerald City Comic Con, Webcomics Weekend, Heroes Con, MegaCon, Anime Expo …

Some dread the con season and look to it as a necessity—without kids to miss me and the love of my life right beside me, how could I see it as anything else other than a dream and an ultimate goal?

It doesn’t matter how long I go to a con for. But every time I go to one, the next day or sometimes days after have a change-over that happens with an audible “CLUNK” as I have to go about my business after the con. I know there are other big cons out there, and if you plan on going to the most ridiculously huge, then Dragon Con needs to be on your list. And If you can, try to get in on the hotels since there’s a whole lot of stuff that happens in the wee hours of the night that you might miss out on if you have to truck out to your car in the super late hours…

As far as surviving a convention with your sanity, some general rules to go by would be to 1. Bathe, 2. be polite—your going to be in close quarters with a large number of humanity for the next few days, and 3. pack a lunch or two. Con food vendors can charge highway robbery.

So while perusing various sites, an ad for a really cute necklace popped up and I just had to share.
This would look lovely on any Steampunk Lolita In my opinion. Check it out! Here's the link to it too.
www.leviticusjewelry.com/product/149567/Antique-Bicycle_817581.html
Collapse