A Newbie's Guide to Navigating Steampunkfashion; A quick and dirty guide to finding what you need.

What is your steampunk style ? take the test find out


Go look whos there and
Add to our member survey if you like.

Banners for your LJ Profiles,MySpace or any where you like.
Large 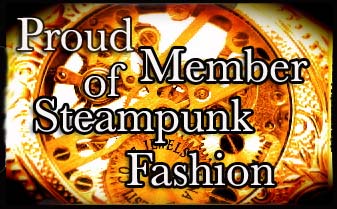 Reference for historical clothing to use as a base or to copy.

Reference for how men can dress

(Yes I know there are a ton more LJ groups, ad the LJ group as a comment that you think fits)

Handy dandy time line click it for the fun.

There were only the two of us, and everyone thought we worked there and kept asking us for information!

Here are the pics of our Victorian Explorer's Outfits and some of the terrific exhibits at the New Academy of Sciences in SF.

Full set of images and links under the cut...

A thing I haven't seen mention of in this group is Myst (and subsequent games). They could reasonably be defined as steampunk (mixed with fantasy in some cases), and they're jam-packed with awesome visuals.

Without spoiling too much: the teleportation devices used in the games are books. Beautiful hand-written volumes don't just let you visit another world mentally -- they can actually take you there. There's also a lot of cool devices: telescopes, submarines, airships, you name it. Steam power and electrical power both feature in abundance. The infamously tough puzzles ARE solvable, I solved most of them alone, but admittedly a couple of Myst's devices would confound players who have never seen a circuit breaker or a gas stove.

The NPCs generally stay out of the way, you only see them for a few minutes in each game, so not a lot in the way of fashion here, per se ... but lots of steamy devices to play with. Not to mention beautiful scenery, wildlife, and music.

Sooo. Has anyone played these games? Found any steamy inspiration in them? Or enjoyed the vacation in another universe?

Ah...HA! I'm finished!! I added a turtleneck so you couldn't see my skin. Lol. I have gloves, but I didn't put them on because I took pictures with my bird, and he won't go a centimeter near the gloves, for some weird reason. (Yet he'll go near my mask???)

This is the costume without the scarf. I'm not sure if I like the scarf...but I don't think I should be showing any skin, so I'm going to keep the scarf.

Hey all, I would love you forever for some feedback on this thing. So far I have the mask, bustle cage and wing/harness set but no actual outfit to go with it.

The most help I need is with a style of skirt/pants/shorts. At first I'd intended to have the cage draped over completely, but I like the look so much I think it might be better to leave it exposed. Alternate opinions welcome obviously :) It would be great if anyone had ideas on how to tie this all together. Thanks much!

I love this!! But I have no idea where it came from...

I don't think anyone has yet posted these fabulous Steampunk Invitations by Jennifer Rodgers. So perfect for tea or a meetup!

I got a chance to hang out with the artist behind them this week and found her both charmingly demented and incredibly talented. You all might be interested in her art and illustrations, much of which is quite steamy.

Since my first few tries at making jewelry I've turn our guest room into a craft room and have been having a ton of fun. I thought perhaps I'd share a few of my favorites.

While investigating watch chains for my young man**, I've discovered Albertina chains - bling-ful Victorian fob chains for women. As this article explains, men's fob chains were sometimes referred to as Albert chains because of Albert's habit of wearing them. By extension, women's chains were called Albertinas.

While men's chains were reasonably restrained (aside from mad fob charms and slightly-too-impressive-looking medals from running races or similar feats of strength - as can be seen all over eBay), women's were often multi-chained confections with metal tassles and dangly bits. Sadly, a lot of the antique ones have been modded into bracelets, but it's another thing to think about if you like the girlie side of Victoriana clothing. (They'd be terribly inappropriate in a boiler room, though.)

( Collapse )** He needed a chain that suited a waistcoat (his everyday chain is a belt-clip one). After being outbid on a lot of interesting and beautiful chains on eBay, I ended up grabbing some silver chain from the local beading shop, attaching a t-bar near one end for his buttonhole and put on a silver Tardis as a fob charm. (The charm was probably originally designed as a phonebooth, but if you don't look too closely...) This economy makes the albertina that I was forced to buy in the spirit of historical (in)accuracy - it's the third, kinda brassy one - a much more reasonable purchase. :-)

Hello! I'm not heavily into steampunk, but decided to give it a go for a local steampunk con next week (you get discounted entry in costume :)) I found this community very inspiring, so thank you all. It was so much fun I think I may do some more :D

Anyway, no pics of my costume yet, but I FINALLY finished my prop: the Zodascope(*), a device for telling someone's astrological state.

I think the "modded cheap clock" idea has definite potential, I'm surprised more people don't do it (I made some modded Harry Potter clocks a few years ago, and in all that time have yet to see anyone else mod clocks to have different faces. I can't be that unique :D) I guess guns have more oomph...

EDIT: And indeed, I'm not that unique :) See the amazing modded clocks at http://www.curiousgood.com/

A friend and I went thrifting today for her birthday. She wasn't looking for anything specific, but found some great fabric for a pirate coat; I was looking for boots to put with my burgeoning steamy Halloween costume, and I found some!

I also got a nicely beat-up suede coat in the same color, which is more punky than steamy, but I think it will tie in. I already have a shirt and vest, so all I need now is the skirt. Are there any free patterns/easy instructions for making a skirt with a bustle? Or will a circle/semicircle skirt over a bum roll look okay? I am looking to do something quick and dirty without buying a pattern, if possible. I'd call myself a moderately skilled seamstress, if that helps.

I MUST have this. Yes. Yes, I must. Absolutely. Must. Have.

I need a close fit adult bike helmet. I want to take a cheap costume bowler hat and hotglue it on top of the bike helmet and scotchguard the shit out of it. Because you have to have a bowler with a bike like that.

Does anyone have recommendations for helmets? I've never actually worn a bike helmet regularly, much less bought one. I want something that protects my noggin enough to be useful but not so alien/bulletheaded to be disguised with a bowler.

How much should I expect reasonably? Is there a difference between skate helmets (very low profile/fitted) and bike helmets in terms of basic street riding protection? I'm not planning to do any crazy tricks, just ride around town. (Portland, OR)

I have a pretty good idea of how to do the hat but if anyone has experience with that sort of thing and discovered the hard way it's harder than it looks - do tell! I'd rather just do it nice looking the first time.

I also need advice on LOCKS. I figure if I'm going to ride a mini pennyfarthing around I better have a damn good lock. Cost, pros and cons of particular models or bike locking hazards in Portland (SW in particular) a plus.

I expect I'll find out in a day or so when one will be available and the cost including shipping - (can you believe $189 for the bike itself!!!) so any info would be helpful.